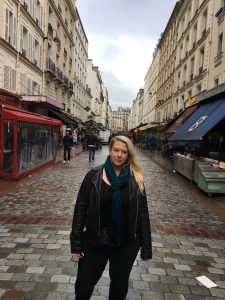 I’m Annie, an East Coast girl forced to suffer the horrors of growing up out west. At some point over the last several decades I’ve learned to love my city and the mountains that surround it. Although, I still long for my ancestral home by the Atlantic like a school girl pining after an older boy. As a kid I aspired to be a starving artist. By some twist of fate I became a well fed housewife in the suburbs. I was married to a damn good man for fourteen years. We decided our dreams were best pursued separately. Together we’re raising two amazing little humans, now with the help of two wonderful step-parents.

I eat too much, drink too much coffee and swear like a fucking sailor. Not around my kids people because, standards. In a former life I studied literature, had daydreams about becoming a college professor and drank far too much whiskey. I enjoy Rock ‘n Roll, filthy rap music, good films, poetry, people who can handle the hard conversations and anyone who makes me laugh. When I’m not with my kids you can find me writing, traveling, spending time with my boyfriend, or drinking Starbucks while walking around Target. I believe becoming a parent is the single most profound experience a human can have, even though billions of people have done it.

I also hold a BA in literature and possess the ability to write beautiful prose free from swears.

2 thoughts on “About The Writer”